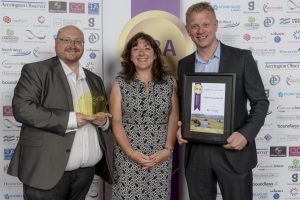 Business has certainly boomed for the winners of the star trophy at last year’s Hyndburn Business Awards.

CMAC Partnership Limited has relocated to a large fourth floor suite of offices in the Globe Centre, Accrington, employed a further 33 employees taking the workforce to 81, increased revenue to almost £22million and secured a new contract starting this month worth around £3.5million.

Last June the first Hyndburn Business Awards was organised by Enterprising People and the presentation night was a huge success with more than 250 people packing Accrington Town Hall’s ballroom. CMAC scooped the Stonehouse Logic Award, for being the most inspirational business, and was awarded a bespoke trophy, designed by Tamannah Begum from Hollins Technical College. It is now on display in the new office alongside the Red Rose Award for Growing Business and a national Specialist Company Award in the Business Continuity Awards in London. All three were won within three weeks.

CMAC is run by friends Steve Turner, managing director, and Peter Slater, operations and commercial director, who met after a few days at St Christopher’s CE High School, Accrington, in 1989. They went on to work together at travel company Fraser Eagle. “We are the people you don’t want to have to employ,” said Peter, as he explained the company was contracted by major travel businesses to arrange accommodation and transport for delayed and diverted planes and train services that are unexpectedly cancelled. We also arrange holidays for people and provide chauffeur cars, so there is also a nice side.

“We are both local and our workforce is entirely local with three of the five managers having worked their way up through the business. To win the top award at the first ever business awards helped us to raise our profile and promote who we are to the local community.”

The business has just celebrated its tenth anniversary; when it founded there were just three employees.